Rocky Hill — On the coldest and grayest days of winter, a warm and improbably bright yellow light reliably shines on a dense thicket of plantings deep inside a repurposed warehouse. They are marijuana plants, some as tall as Christmas trees, thick with flowers.

“For these plants, it’s like July 15 every day,” said Rino Ferrarese, the president and co-founder of CTPharma, one of the four licensed producers of medical cannabis in Connecticut, a state weighing a jump into the much bigger recreational market.

Serrated leaves and flowers glisten with what appears to be a light frost, a promising sign for a cash crop nearing maturity. The whiteness actually is a sticky resin containing the active elements of cannabis, THC and CBD, among others.

By weight, the weed Baby Boomers smoked in college probably was no more than 3% or 4% THC (tetrahydrocannabinol), the mood-altering substance in marijuana, Ferrese said. Lexikan, his company’s popular version of a strain known on the street as Lemon Skunk, has more than 30%.

A vial with an eighth of an ounce, or 3.5 grams, of dried and trimmed Lexikan flowers commands a premium price, currently advertised for $42 in Hartford’s medical marijuana dispensary, one of 18 statewide. The plants now nearing maturity each should yield a pound and a half of flower buds.

State law requires third-party lab testing and labels listing the precise amounts of THC, CBD, terpenes and other substances in every product sold by the four producers: CTPharma in Rocky Hill, Curaleaf in Simsbury, Advance Grow Labs in West Haven and Theraplant in Watertown.

The cheapest item is a $2 packet of cannabis-infused honey, one of 120 products in the company’s ever-shifting line, each marked with an SKU number and barcode. On a recent day, Ferrarese estimated the retail value of the vault’s contents at $3 million.

Pot is rapidly garnering the trappings of any other consumer product. In coming months, the General Assembly will decide whether CTPharma’s growing product line can be offered to a mass market. 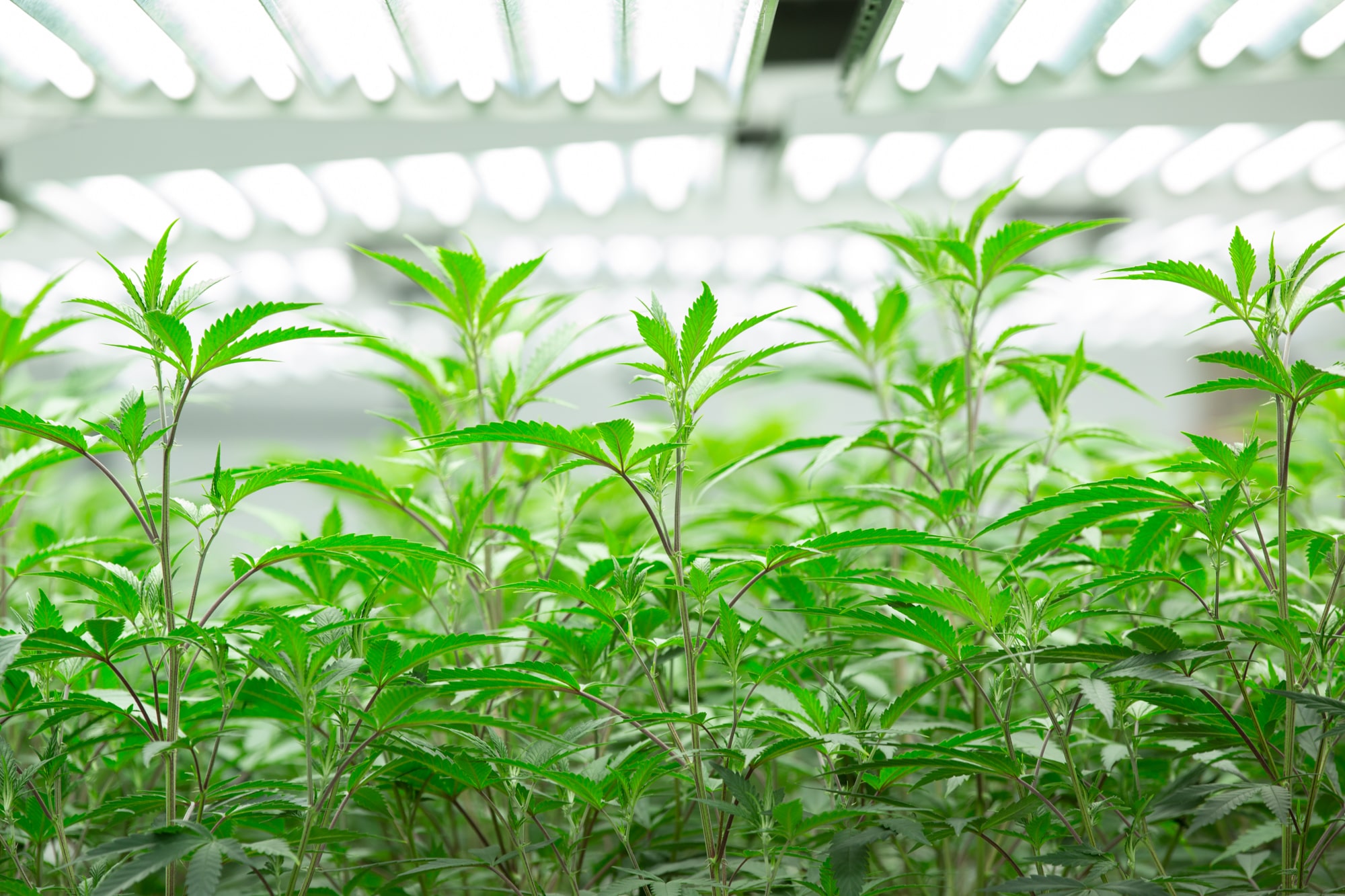 Young marijuana plants get 18 hours of artificial light and 6 of darkness at the CTPharma in Rocky Hill. An automated drip irrigation system feeds them. Later, they will be transferred to a room with lighting design to promote flower growth.

CTPharma is backed by mainstream investors, including a former Republican lieutenant governor of Connecticut, Michael C. Fedele. The security director at CTPharma is Mark Kaczynski, a retired DEA agent with a part-time gig as a suburban mayor in nearby Berlin. Its registered lobbyist is a former Republican state lawmaker and consumer-protection official, Gary Berner.

Connecticut decriminalized possession of marijuana and authorized its use for a prescribed list of medical maladies in 2012. The growers and dispensaries opened in 2014, and the market for physician-certified medical users has grown steadily, doubling in the past four years.

Until recently, CT Pharma operated out of a 17,000-square foot building in the shadow of the Arrigoni Bridge in Portland, which lies on the opposite side of the Connecticut River from Rocky Hill.

Given the current constraints of the market, the new building is ridiculously large — 216,532 square feet, or 4½ football fields. With high overhead clearances, it has the potential for double decking that would create 400,000 square feet of usable space, a 24-fold increase over its original facility.

As of last week, the statewide customer base for legal cannabis was 50,142 state residents prescribed by one of 1,390 registered physicians to use medical marijuana for any of 38 debilitating medical conditions in adults and 10 in children.

Needless to say, the privately held company is building for tomorrow, not today.

Investors see the medical market in Connecticut maturing to at least 80,000 people, perhaps as many as 110,000, Ferrarese said. Opening the state to legalized recreational marijuana, as was done in neighboring Massachusetts, promises as much as a tenfold increase. The company also is pursuing the development of pharmaceuticals.

Last week, Gov. Ned Lamont proposed legislation authorizing recreational sales beginning in May 2022. For the industry, passage is a question of when, not if. Ferrarese said he and the other cannabis growers all are preparing to ramp up production.

The biggest obstacle to passage may be addressing issues of social equity — essentially who should benefit from the new business opportunities and the tax revenues in a recreational market. 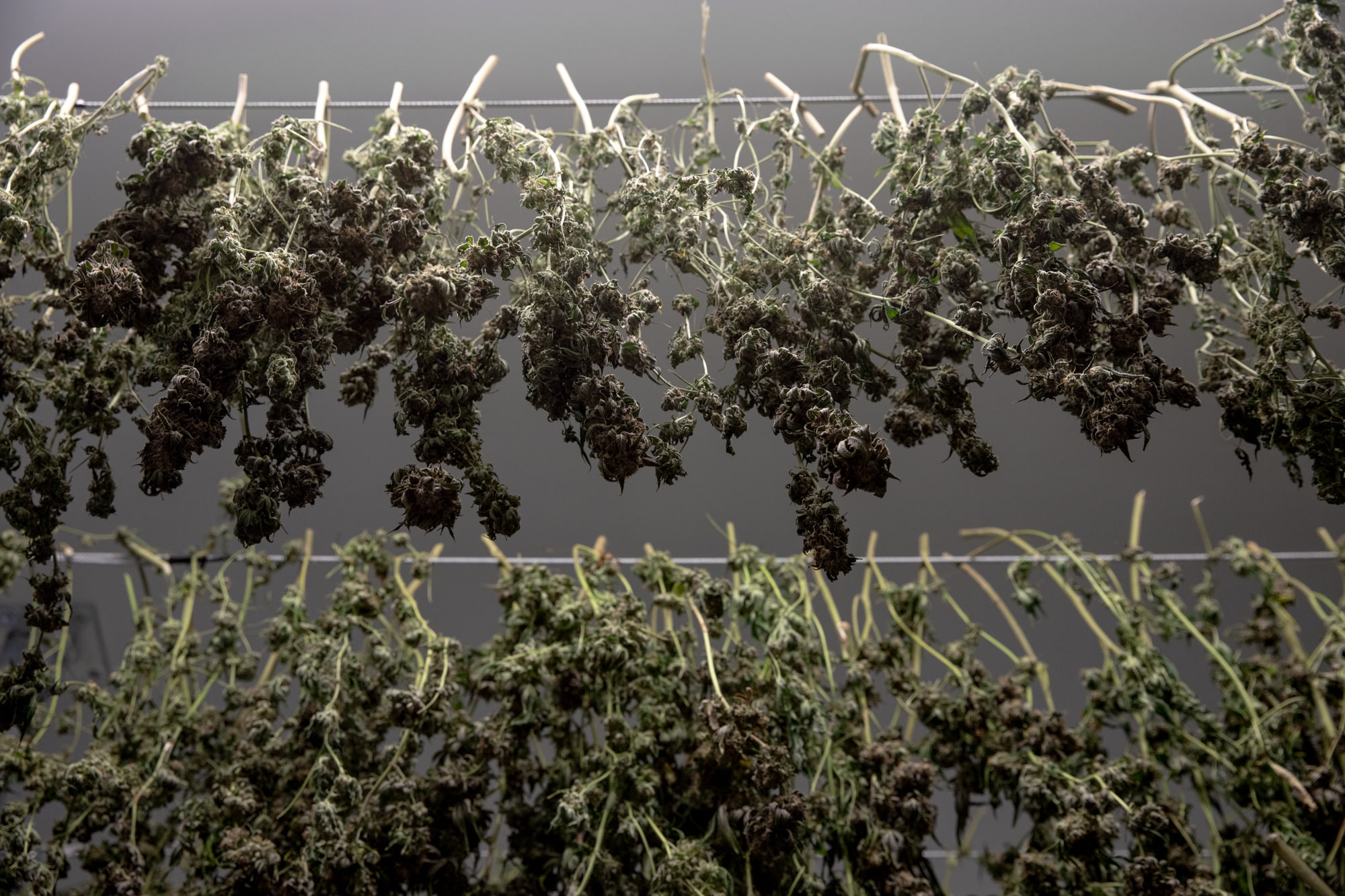 Marijuana flowers drying in a room where the humidity and temperature are controlled at CTPharma in Rocky Hill.

Jonathan Harris, who formerly oversaw the medical marijuana business as the commissioner of the Department of Consumer Protection, now is a senior advisor to Lamont, tasked with structuring the recreational market in a way that can accommodate entrepreneurs from communities of color disproportionately harmed by the criminalization of pot.

“There are many barriers to entry,” Harris said. “And we’ve seen how this is unfolding in other states, all too often unsuccessfully.”

One of the barriers is money.

The price of entry to produce and sell medical marijuana includes annual licenses that cost $75,000 for a producer and $5,000 for a dispensary. For a recreational license, the administration is looking at a fee of $750,000 for growers and $250,000 for dispensaries.

Lamont’s bill would create an automated system to expunge the criminal records for simple possession and to create tiered licenses, including one for micro-cultivators. An Equity Commission could make further recommendations before the start date in 2022.

“The governor intends to continue that robust conversation with the legislature, advocates, other states and, most importantly, people from Black and brown communities that have been unjustly impacted by the war on drugs,” Harris said.

CTPharma’s expansion has come since a private equity group led by Fedele, a successful businessman who ran for governor in 2010, bought the business in a deal closed in June 2018. The medical market then was no more than 27,000 people. Terms of the sale were private.

“They were the original investors, and they did very well in the sale,” said Fedele, who is chair of the closely held company’s board.

Whatever the sales price, it was only a portion of the new owners’ investment. According to land records, they paid $7.57 million for the new building on Valentine’s Day a year ago. Since then, they have poured more money into the business.

More than 100,000 square feet of former open warehouse space has been converted to laboratories and rooms for growing, drying, trimming, curing and packaging weed, as well as extracting THC, CBD and other elements for concentrates. 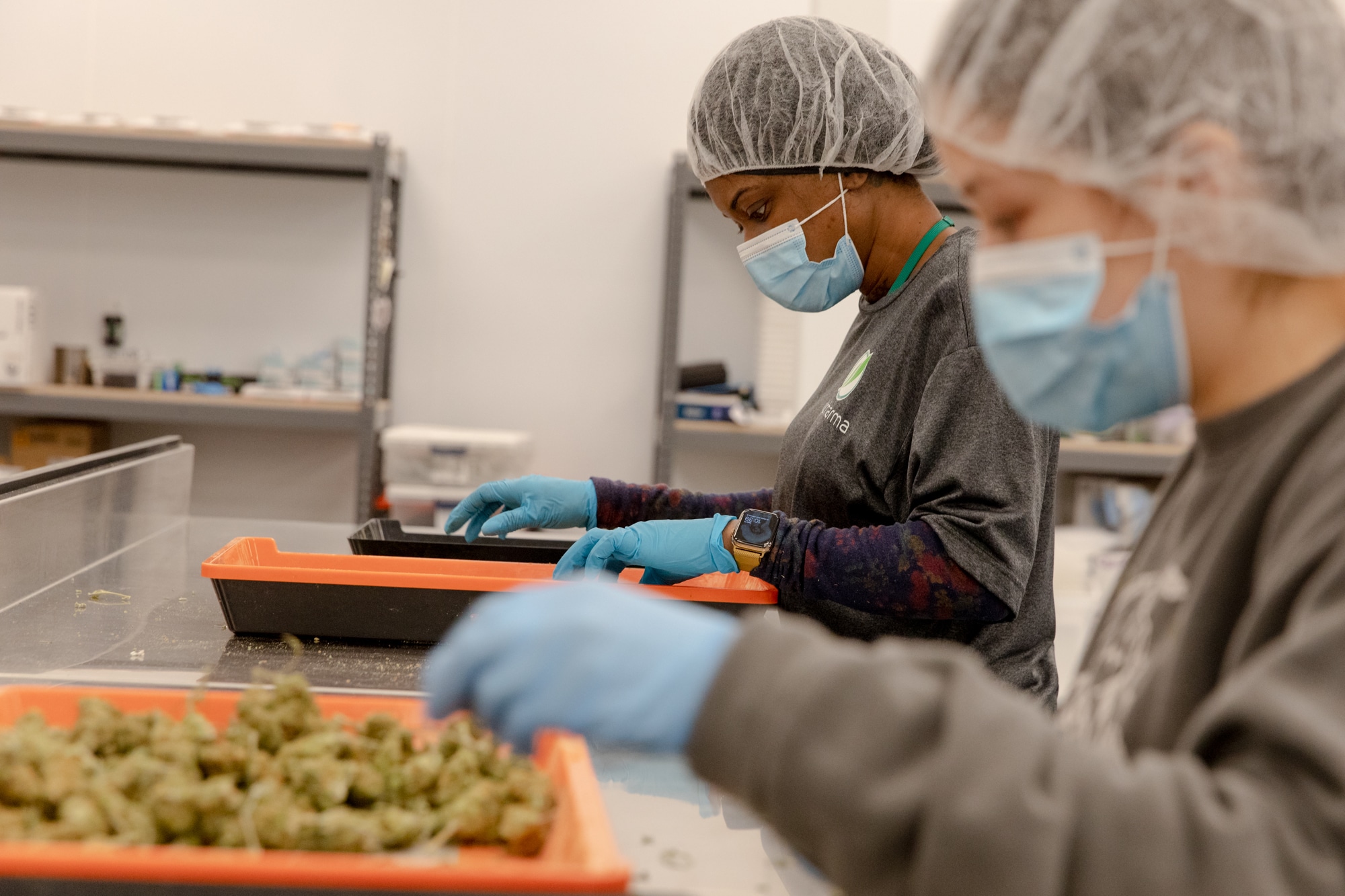 There is no giant indoor field of marijuana. Smaller grow rooms allow different artificial seasons throughout the year, allowing a steady flow of harvested product, as well as a steady flow of work for a staff of 100.

“Each one of those flower rooms gets planted and harvested up to six times a year. And we stagger the rooms,” he said. “So there’s always enough work for everybody to do. It’s this perpetual cycle. And patients want fresh product.”

They contain the stock for baby plants that will be cloned from the mother plants, various strains with street names like Headband, Motor Breath and, of course, Lemon Skunk. Connecticut does not allow the commercial growers to use street names, hence the rebranding.

One of the advantages of cloning over seeds is a guarantee of raising only female plants. Pollination by a male plant would cause a female plant to produce seeds, not flowers.

The cloned cuttings are grown in a proprietary mix of soil and peat, initially in three-gallon containers under metal halide lights that shine for 18 hours a day and produce a blue-spectrum light mimicking spring-time sunshine. The quality and amount of light prompts the plants to grow up and out, producing thick vegetation.

The plants are eventually replanted in 10-gallon containers and transferred to a grow room where the light is red-spectrum, yellowish to the human eye, and suggestive of summer and fall. Light eventually will be reduced from 18 to 12 hours, an artificial autumn that tricks the plants into producing flowers. In the final weeks, the temperature is lowered, another signal promoting flower growth.

A control unit that manages the flow of water and nutrients through a web of piping to plants cost $25,000, and Ferrarese said they might eventually need eight more. The walls are white and floors shine with a gray epoxy that costs $4 a square foot.

Everyone wears hair nets, and the vibe is somewhere between a commercial kitchen and a laboratory. The air is redolent with the sweet and sour odors of the various pot strains. Visitors, whose names are logged with state regulators, wear coveralls that have no pockets. Access to every room is controlled by keycards. Doors left ajar for 30 seconds trigger audible alarms. Security cameras are ever watchful, inside and out.

Four years ago, an investor in the original group was spotted removing a small amount of marijuana. He was arrested, and a license necessary to be a financial backer was revoked.

A CT Mirror reporter and photographer toured the facility Thursday. On Friday, the governor’s top budget official, Melissa McCaw, the secretary of policy and management, made the same trip.

The potential for pharmaceuticals

Aside from the likelihood of eventual access to an adult recreational market, the new ownership led by Fedele sees growth potential for cannabis-derived pharmaceuticals, a prospect the Food and Drug Administration was slow to embrace.

CTPharma is now conducting an FDA-authorized investigative drug trial on a medication for stress and pain. Researchers at the Yale School of Medicine are doing double-blind testing of the drug.

“We are testing what is the efficacy of CBD at various doses, to see CBD in combination with THC, or THC alone,” Ferrarese said. “Are there differences? You know, the way a patient experiences pain and stress in a clinical setting? We’re actually doing blood draws. And we’re doing vital signs as well. And a patient survey in a controlled clinical setting.”

Fedele was kicking the tires on the cannabis business about the same time the FDA was preparing to approve Epidiolex, the first marijuana-derived drug cleared for the U.S. market. The drug is an oral anti-seizure medication that uses CBD, or cannabidiol, a substance in marijuana and hemp that does not produce a high.

Dr. Scott Gottlieb, then the FDA commissioner, made clear in announcing the approval that the time for scientific analysis and research into marijuana had come.

“This approval serves as a reminder that advancing sound development programs that properly evaluate active ingredients contained in marijuana can lead to important medical therapies. And the FDA is committed to this kind of careful scientific research and drug development,” Gottlieb said.

To parents of children with severe forms of epilepsy unresponsive to other medications, CBD and Epidiolex have been a miracle, reducing or even stopping seizures that could wrack some children dozens or hundreds of times a day. 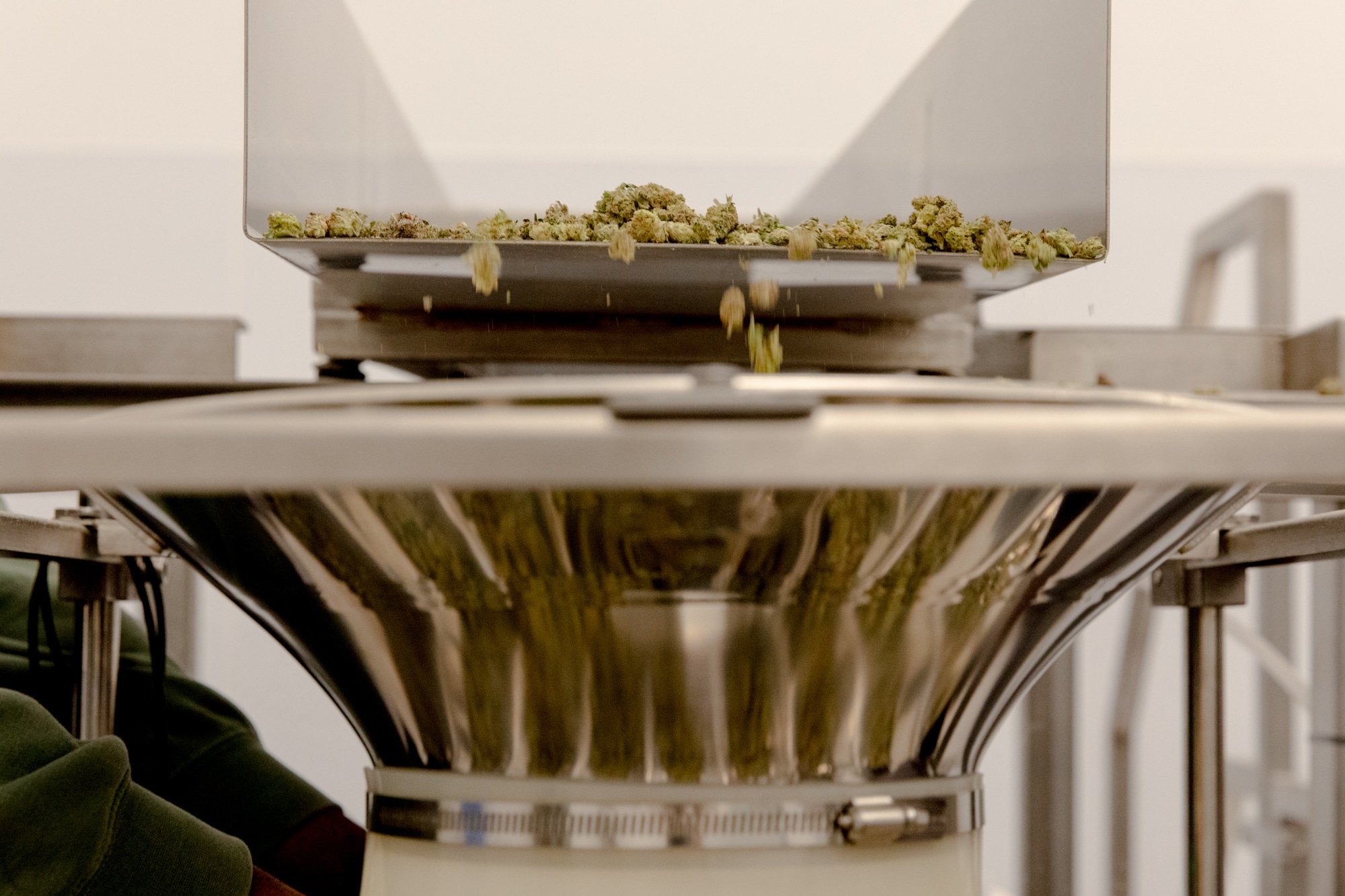 Trimmed marijuana buds are fed mechanically into vials. The weight is double-checked by hand.

“When you start looking at the potential of what you can do from the benefits of this plant, that’s really where the home run is,” Fedele said. “And that takes money. When you start getting into pharmaceutical R&D, into the different trial studies and things, it takes money.”

Ferrarese came to the pot business from a successor to a venerable Connecticut company also in the business of extracting products from botanicals: E.E. Dickinson & Company, which makes witch hazel used in astringent skin cleansers, soaps, mouthwashes and makeup.

His co-founder and the company’s first chief executive was Tom Schultz, a Wall Street lawyer and investment banker who ended up running Dickinson after overseeing its merger with another producer, American Distilling.

Schultz, 70, who died last year after being struck by a van while bicycling, became a national figure promoting the commercial potential of cannabis.

“It wasn’t that big of a lift going from witch hazel to cannabis,“ Ferrarese said, adding that their background probably helped compete for a license. “The state knew us from the witch hazel business, and knew that we were proficient with cultivation and harvesting and processing and extracting. It was just a good fit.”