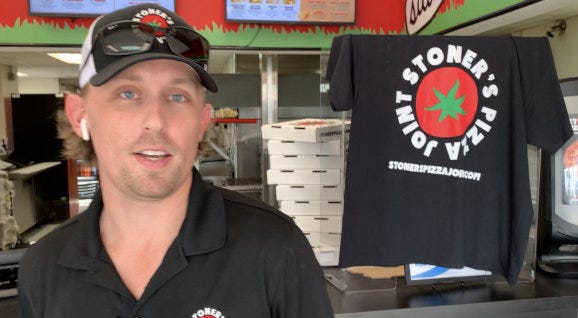 Stoner’s Pizza opens in Daytona Beach, next to a pot store

DAYTONA BEACH — The curiously named Stoner’s Pizza Joint next to the Curaleaf medical marijuana dispensary here opened in 2017 only to close a few months later.

It’s now back in business with new owners and new slogan: “Get baked.”

“The Stoner’s chain changed hands this past May. We were looking to open a location in Daytona and knew there used to be a Stoner’s here, but didn’t know where it was. By chance, we wound up choosing the same building,” said Mobley.

‘Salute to the past’: River Deck restaurant opens in New Smyrna Beach

The previous owners of Stoner’s closed the restaurant before the Curaleaf pot store next door opened in 2018.

The new Daytona Beach Stoner’s at 918 W. International Speedway Blvd. reopened on Jan. 13. It employs a dozen people. “We hope for more workers as we scale and sales increase,” said Mobley.

It is the latest of a handful of restaurants to open along ISB, the city’s main east-west traffic corridor, in recent months. Others include 4 Rivers Smokehouse and Tiano’s Cucina Italiana at One Daytona, Famous Philly’s Cheesesteak Grill at Tarragona Shoppes next to Mainland High School, and Cantina Louie Mexican Street Food at the Gates of International Speedway shopping center on the corner of ISB and Fentress boulevards.

In addition to his role with the parent company, Mobley is the operating partner of Pie Empire LLC, a newly formed business that recently bought the franchise rights to open 10 Stoner’s Pizza Joint stores in Central Florida. Pie’s president and principal owner is Don Boyle, a businessman who has a home in New Smyrna Beach.

The Daytona Beach location is Pie’s first Stoner’s restaurant. “As Pie Empire, we plan to open stores in the Orlando area. We’re targeting the University of Central Florida at the moment, and possibly Gainesville,” Mobley said.

Stoner’s has a store in north Jacksonville owned by a different franchisee who opened prior to Stoner’s Pizza Joint Holdings’ purchase of the chain.

The chain began in 2013 in Georgia. Over the years, it has changed hands multiple times. “I believe it was originally named Stoner’s because they actually had brick ovens,” said Mobley. “We (the current parent company) kept the name because of its play on words. We like to keep it loose and we like to have fun. Pizza’s a crowded market. We like to be able to stand out with our food quality and branding.

“Our customers aren’t getting high on anything we put in our pizzas, ingredients-wise. We don’t infuse our food with any THC or CBD. There’s a shop next door if they want to add their own veggies or oil. That’s up to them,” Mobley said.

He acknowledged, however, that it’s convenient to be located next to a medical marijuana dispensary. “It is not THE strategy for us, but it is a strategy,” he said.

The menu for Stoner’s includes pizzas such as the “No Brainer Deluxe,” “Taco Pizza,” and “The Veggie Pizza.” The Hawaiian Pizza comes with a free lei. Prices range from $7.99 for a regular 10-inch traditional cheese pizza up to $20.99 for an 18-inch “Really Big”-size “Nice to Meat You” pizza. Customers can also build their own custom pizzas.

The store also sells Stoner’s Pizza Joint-branded T-shirts with humorous sayings on the back such as “Legalize Marinara,” “Get Baked,” and one that’s coming that will say “Got Stoned in Daytona.” The T-shirts sell for $15.99 each.

“We like to keep it loose. We like to have fun,” said Mobley. “The pizza industry is competitive, but is also fairly indestructable. It’s done really well during the pandemic. We believe the fun name combined with the simplicity of our operations and low overhead make a recipe for success.”

Brad Gifford is the leasing agent with NAI Realvest/Charles Wayne Commercial who helped Boyle and Mobley find the location for their Daytona Beach store. He also represented the landlord, but didn’t get the property listing until after the previous Stoner’s pizzeria had closed.

Boyle and Mobley “were looking for a second-generation restaurant space in the 1,400 to 1,600 square foot range that could capitalize on catering to college students,” said Gifford. “That location was ideal because it’s near Embry-Riddle, Bethune-Cookman University and Daytona State College. And the traffic count averages 38,000 cars a day. You have to have traffic and you have to have parking and this one has both.”

Mobley said the signage for the old Stoner’s was gone when he and Boyle agreed to lease the space, “but there was some equipment and fixtures still in place that we took advantage of. That helped us to open less than three months from signing the lease. That’s very quick.”

Takeout only, so far

The Daytona Beach Stoner’s has joined the Daytona Regional Chamber of Commerce. The chamber recently held a ribbon-cutting to welcome the pizzeria back into the community.

The Daytona Beach Stoner’s has a drive-through window for pickup orders. It also delivers to the area that includes most of Daytona Beach, from the ocean to a portion of the LPGA area west of Interstate 95 that includes LPGA International and the Latitude Margaritaville 55-and-older communjty. The delivery area also includes the cities of Holly Hill, South Daytona and portions of Daytona Beach Shores and Ormond Beach south of Granada Boulevard.

The pizzeria does not offer dine-in service at this time “out of an abundance of caution because of COVID,” said Mobley. “We might eventually add a handful of seats.”

The allusions to pot in the chain’s name “helps us draw new customers, but at the end of the day it’s all about delivering great food with great people and turning a profit,” Mobley said. “We pride ourselves on having streamlined operations, low overhead costs and providing a great consistent product.”