It’s been almost nine months since the NHL celebrated Southern hockey with a party at the Cotton Bowl, a raucous crowd of more than 85,000 people piled in to watch the southernmost outdoor game in league history and the first Winter Classic between two Sun Belt franchises.

Now, it’ll be days before the league awards the Stanley Cup to a non-traditional market after the first-ever all-South Stanley Cup Final between Dallas and Tampa Bay. The winner between the Stars and Lightning will claim their franchise’s second Stanley Cup, and perhaps the title as the league’s flagship team in the sun.

The Stars lead the series 1-0 after beating Tampa Bay 4-1 in Game 1 on Saturday night.

This year, it’s the battle of Texas and Florida taking place in Edmonton, Alberta.

Stars chairman Jim Lites was part of the Stars when the team relocated in 1993 from Minnesota, and has watched the market develop into a hockey hotbed, so much so that the Stars hosted a draft (2018) and a Winter Classic (2020) within two years of each other.

“Why is it easier for us to get our players to where we need to get them, compared to Toronto or other cities that are in the North that are more traditional markets that haven’t been as successful, Minnesota?” Lites said. “I don’t know, is it because there’s less pressure? Or is it just we’ve done a good job of finding players and having really good management teams in place to take care of it.”

Lites pointed to both hockey operations departments in Dallas and Tampa Bay, and said the best thing he did for the Stars in the last decade was hire Jim Nill to be general manager. The Lightning, meanwhile, are owned by one of the top owners in pro sports (Jeff Vinik) and haven’t missed a step when the GM title was passed from Steve Yzerman to Julien BriseBois.

The people calling the shots are a big part of the equation, for sure. The Arizona Coyotes missed the playoffs in the last seven seasons and have won two playoff series since relocating from Winnipeg in 1996. The Florida Panthers have not won a playoff series since their run to the Cup Final in 1996. It’s no coincidence that both franchises hired another general manager this offseason.

On-ice success led to more involvement with youth hockey, and each area is represented in the Cup Final. Lightning forward Blake Coleman was born and raised in Plano, and played in the Stars’ youth hockey system growing up. Stars forward Roope Hintz — though hailing from Finland — spent one year of his teenaged development playing in Tampa.

“It’s great, I guess,” said Stars captain Jamie Benn, who lives in Dallas in the offseason. “Haven’t really thought about it. I’ve just enjoyed my time playing in Dallas in front of some great fans.”

With three more wins, the Stars could become the first team to win both the Winter Classic and the Stanley Cup in the same season — and become the league’s Southern darling.

Injury updates: Stars interim coach Rick Bowness said he did not have an update on forward Roope Hintz, who blocked a shot during the third period on Saturday and did not return to the game afterward.

Lightning coach Jon Cooper said Sunday that he did not expect captain Steven Stamkos to be available for Game 2. Stamkos has not played at all this postseason, but Bowness said the Stars are anticipating him returning at some point during the Cup Final.

“Listen, he’s a great player, changes the whole look of the power play,” Bowness said. “That’s a big factor. We can’t take three penalties in one period like we did last night. They’re going to do some damage with Steven out there and his ability to one-time the puck.” 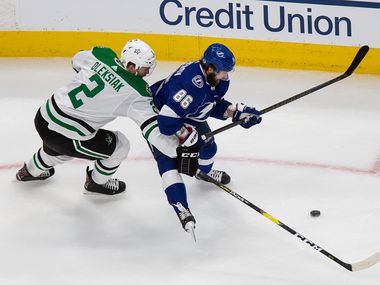