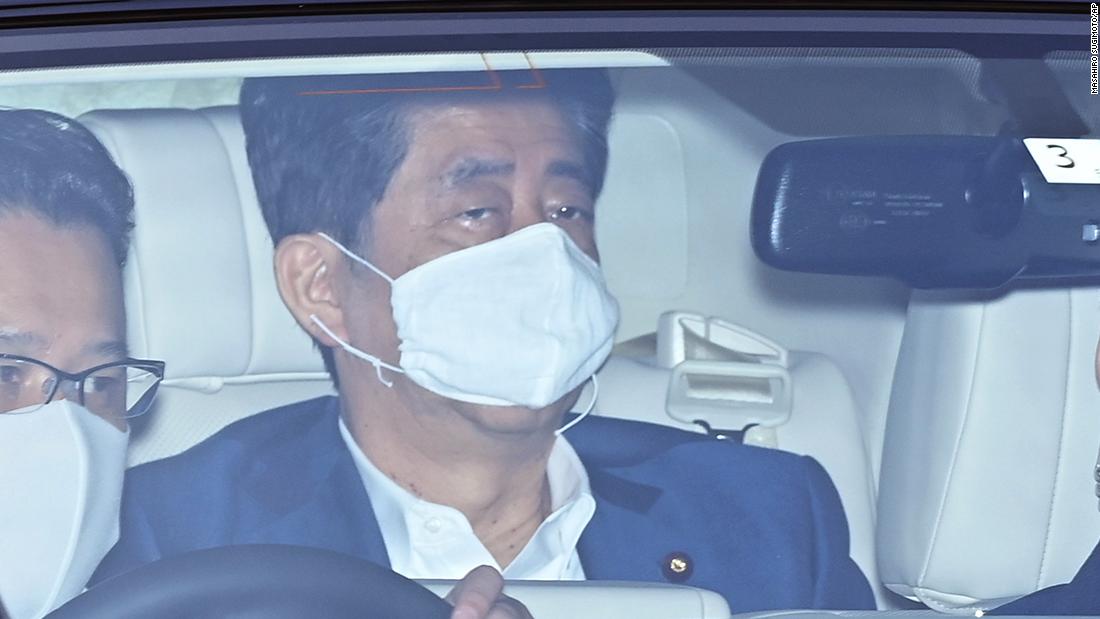 “Even though there is one year to go in my tenure and there are challenges to be met, I have decided to stand down as prime minister,” said Abe at a press conference in Tokyo on Friday, adding that he would like to apologize to the people of Japan for being unable to fulfill his duties during the coronavirus pandemic.
Abe suffers from colitis, a non-curable inflammatory bowel disease, which was also a factor in his sudden resignation as prime minister in 2007, ending his first term after just over a year in office. On Monday morning, Abe visited Keio University Hospital in Tokyo for what was his second hospital visit in a week.
“For almost eight years I controlled my chronic disease, however, this year in June I had a regular check-up and there was a sign of the disease,” he added. “I made a judgment that I should not continue my job as prime minister” said Abe. “I need to fight the disease and need to be treated.”
Markets reacted negatively to the announcement. Japan’s benchmark Nikkei index closed down 1.4% Friday after the news broke. It initially tumbled more than 2% before paring losses. The Japanese yen, a traditional safe currency haven, rose 0.3% against the US dollar.
Following his previous resignation in 2007, Abe was reelected in 2012. Since then he has been the dominant force in Japanese politics, winning a landslide third term in 2017 and a fourth in 2019, despite multiple scandals and plummeting popularity.
Under Abe, his right-leaning Liberal Democratic Party (LDP) has also seen major success, benefiting from the fracturing of its long-term rival Democratic Party, which split in two in 2017. Abe leaves the LDP in control of both houses of parliament, with a large majority in the lower House of Representatives.
That success should guarantee an LDP successor to Abe. Japan is not a presidential system, instead the country’s leader is chosen by parliamentarians, so the next LDP leader, whoever that is, should have an easy path to becoming prime minister. Abe said he will remain in office until a successor is chosen.
When Abe was elected to a second term in 2012, Japan was in the economic doldrums following decades of stagnation. He soon launched a grand experiment popularly known as “Abenomics,” which included three so-called arrows — massive monetary stimulus, increased government spending, and structural reforms — that his allies credited for reviving the country’s economy and boosting consumer and investor confidence.
“Japan is no longer the Japan of the past,” Abe said in January 2020. “We have succeeded in completely breaking through the ‘wall of resignation’.”
But any success of Abenomics was largely in avoiding continued decline than prompting a major boom, and the world’s third-largest economy remained vulnerable throughout his time in office. Japan tipped deeper into recession as the coronavirus hit this year.
A major factor that has dogged Abe during his time in office was the country’s rapidly aging population.
More than a third of the Japanese population is over 65, and the country marked a new record low birth rate in 2019. The country’s demographic decline means a shrinking cohort of workers is left supporting an increasingly elderly population in need of healthcare and pensions.
Despite this, Abe’s Japan largely avoided relaxing the country’s tight controls on immigration, which could have boosted the workforce. Plans to restore the country’s fiscal health have not addressed the fact Japan’s debt-to-GDP ratio remains the highest among industrialized nations.
Abe touted the need for workstyle reforms, calling women the country’s “most underutilized resource” and vowing to improve gender representation and closing gaps in the workforce with “womenomics.” Critics say Abe did not manage to address the country’s gender gap or resolve issues that prevent women from greater participation in the economy.

On the diplomatic front, too, Abe’s achievements were mixed. He cultivated strong ties with Washington — Tokyo’s traditional ally — and attempted to build a personal relationship with United States President Donald Trump, traveling to New York to meet him while Barack Obama was still in office.
During that “unofficial” meeting, Trump’s first with any world leader, Abe hailed the US-Japan alliance and said he wanted to “build trust” with the new President. He strongly supported Trump’s initial hard line on North Korea, which matched Abe’s own hawkish tendencies. His ability to cultivate personal ties with Trump are often credited as one of the biggest reasons why Japan has be able to avoid a trade war with the US.
But as Washington’s relationship with Pyongyang tipped towards diplomacy, with both Trump and South Korean President Moon Jae-in holding historic summits with North Korean leader Kim Jong Un, Abe appeared to be left out in the cold, scrambling for his own meeting with Kim.
The legacy of World War II, during which the Imperial Japanese army invaded multiple neighbors and committed war crimes and atrocities, has long poisoned relations in East Asia, with suspicion of Japan remaining strong in China and the Koreas.
Many in the region — as well as some in Japan — were hostile to Abe’s desire to rewrite the country’s post-war pacifist constitution to allow Tokyo greater leeway to build up the Japanese military and engage in overseas operations.
Early in his second term, Abe visited the controversial Yasukuni Shrine, igniting a firestorm of criticism and condemnation among neighboring countries. The Yasukuni Shrine is regarded by China and the Koreas as a symbol of Japan’s imperial military past.
Throughout his time in office, a slow-burning dispute over sovereignty of islands in the East China Sea — called the Senkakus in Japan and the Diaoyus in China — threatened to boil over, though Abe also held a historic phone call with Chinese leader Xi Jinping in 2018, a major step forward in relations between the two nations.
However, ties with a traditional ally have been less healthy, with a major diplomatic spat between Japan and South Korea last year. That dispute, in which trade and military intelligence deals were scrapped, was partly inspired by the legacy of World War II.

One of Abe’s major domestic achievements was securing the 2020 Tokyo Olympics, a success that was ultimately undone by the coronavirus, which forced the competition to be postponed to 2021.
An initial unwillingness to put the Games off was partly credited for Japan’s lackluster response to the coronavirus pandemic, which hit the country early in 2020 and continues to cause major issues, with much of the aged population particularly at risk.
On Friday, Abe said that as the host country, Japan would need to fulfill its responsibility. “My successor will continue to fulfill that responsibility by closely cooperating with organizers. There are various matters that we need to address,” said Abe.
More successful was Abe’s handling of the abdication of Emperor Akihito, the first Japanese monarch to step down in two centuries. He was succeeded by his son, Emperor Naruhito, in October 2019, starting the Reiwa era.
“Like the flowers of the plum tree blooming proudly in spring after the cold winter, we wish the Japanese people to bloom like individual flowers with the (promise of the) future. With such a wish for Japan, we decided upon ‘Reiwa’,” Abe said on announcing the new era.

Abe was born on September 21, 1954, in Tokyo to a prominent political family. Both his grandfather and great uncle served as prime minister, and his father was a former secretary general of the LDP.
He studied politics at Tokyo’s Seiki University and the University of Southern California, but initially entered business, taking a position with Kobe Steel in 1979.
Three years later however, he became an assistant to the Minister for Foreign Affairs, and in 1993 Abe was first elected to the House of Representatives, aged 38. He was reelected seven times, and held a number of cabinet positions throughout the 2000s.
In 2003, Abe became secretary general of the LDP, and four years later the party’s president and prime minister of Japan.
His first term was marred by controversies and worsening health, and he stepped down as party leader and prime minister in 2007, eventually returning to both positions in 2012.
Abe married Akie Abe, née Matsuzaki, in 1987. The couple have no children. As first lady, Akie Abe was highly involved in politics, occasionally attracting scandal and prominently disagreeing with her husband, particularly on social issues.