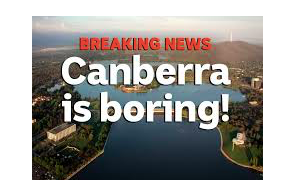 Well who’d have known it the decrminalization of cannabis in the ACT didn’t engender the end of civilization as we know it or as Liberal politicians would have wished it had ..and….. we’d suggest the money brokers in the medical cannabis sector in Australia too.

Yes the ACT is as boring and a dull place as it ever was.

Having followed the same story in countless US jurisdictions here at CLR we can’t say this comes as much of a surprise to us, or actually, we’d suggest, those politicians and shock jocks who hoped for evil cannabis reefer madness in order for political and pecuniary gain even though they knew in their faux wailing and gnashing the end of civilization wouldn’t come about because a few people weren’t getting arrested for smoking weed.

The ABC reports, and we thank them for this balanced and comprehensive write up a year later.

Dire warnings of legal loopholes, a mental health crisis and drug driving fears accompanied the legalisation of cannabis in the ACT last year.

But one year on, cannabis users and stakeholders alike say that, while overall the impacts have been subtle, the change has been for the better.

“Overall, we found cannabis use hasn’t changed and, in some ways, that’s the big story, because there were really dire predictions at the outset,” Alcohol, Tobacco and Other Drug Association ACT chief executive Devin Bowles said.

“The sky hasn’t fallen and people who need to access treatment are better able to do so while the taxpayer is saving money. It’s a win-win.”

The legislation changed the laws governing personal possession, use and cultivation of cannabis in Canberra.

Coming into effect on January 31 last year, the new laws allowed possession of up to 50 grams of cannabis per person, and made it legal to grow and consume cannabis in your own home.

The plants must be grown outdoors and there is a limit of two plants per person and four per household.

While possession and cultivation became legal, buying the seeds and supplying cannabis or cannabis plants to anyone remained illegal.

But the legislation is at odds with Commonwealth cultivation and possession laws, which still make it unlawful to possess cannabis in the ACT.

This legal conflict between the territory and the Commonwealth prompted concerns ACT Policing could ignore the local laws and instead charge users under federal law.

Those fears so far have been unfounded.

ACT Policing figures show the number of Simple Cannabis Offence Notices issued in 2020 dropped by almost 90 per cent — down from 56 to 5.

Interstate residents and ACT under-18 residents can still be charged.

Police figures also show there have been no standalone small amount cannabis possession offences recorded since the new legislation came into effect.

“There remains the tension between Commonwealth drug possession laws and the ACT’s cannabis laws, however, this has not stopped the ACT law being implemented,” he said.

“Drug use and drug possession continues to be associated with other crime types such as drug driving, assault, burglary and possession of stolen property etcetera.”

No increase in hospital visits recorded

Another serious concern about the laws centred on the physical and mental health effects of recreational cannabis use.

Shortly after the laws passed the ACT Legislative Assembly, but before they became law, Federal Health Minister Greg Hunt wrote to Chief Minister Andrew Barr about the potential health impacts.

ACT Health launched a public health campaign about the potential impacts of cannabis use — which include reduced brain function, memory loss, and an increased risk of psychoses, or even developing schizophrenia.

But ACT Health data shows there has been no increase in hospital presentations since the laws passed.

“Because cannabis usage rates were not affected by legalisation, the flow-on effects through mental health haven’t happened and what’s more, people who need treatment are able to get it more openly,” Dr Bowles said.

“That applies to treatment for their cannabis use, but also for associated mental health issues, so we see it as a positive for mental health.”

Wastewater testing also showed no increase in cannabis use immediately after the legislation passed.

A spike in cannabis levels was detected in June, but similar increases were observed in other jurisdictions, which authorities attributed to the COVID-19 pandemic.

ACT Health said this was consistent with national trends.

“An increase in cannabis use was observed, mainly cited as due to ‘boredom/less things to occupy time’, ‘more time to use the drug’ and ‘greater anxiety/depression with COVID-19’,” ACT Health said.

New laws ‘not perfect’, but beneficial for users

Canberra resident Dave is a casual cannabis user and believes the new laws have had a positive impact.

He said one of the biggest benefits was on the way people perceived cannabis users, which he believed was encouraging problem users to seek help.

“Cannabis is not seen as being so much dependency forming,” he said.

“And I think a lot of people felt the drug treatment system, as it were, didn’t really have a place for cannabis in the way that it does for other drugs like alcohol and heroin and methamphetamine.

“I think they’re [now] more inclined to go and to seek help with that, to try to get drug treatment, go into counselling, maybe psychiatry, psychotherapy, things like that, because there’s less of a severe stigma involved with it now.

“Certainly, the people who are going in to have issues dealt with don’t feel so much shame about having issues with cannabis use.”

But Dave does not think the law is perfect, and said the rules around roadside drug testing need to be reformed to better measure the intoxication level of the driver.

“It’s simply the presence or absence of it that defines whether you’ve committed a crime, and they don’t consider whether you’re impaired, as with alcohol testing,” he said.

“It is really a hole in the legislation.”

For the man who started it all, this is just the start

The architect of the legislation, Labor MLA Michael Pettersson, has been pleased with the results so far.

But he said the laws were not the end of the road for drug reform, but rather a step towards treating drug use as a public health problem, rather than a criminal one.

“For the most part, I think things are pretty similar to what they were before, but I think we’re now heading in the right direction,” he said.

“I don’t think you can solve the problem of drugs in our society with changes to our laws, it takes a holistic approach across all elements of our society.